I had asked if you have any questions about traveling to Iran as I recently returned from a trip there. So, here are all of my answers along with some pictures. I hope you enjoy!

Q. What’s the biggest misconception that westerners have about Iranians?

I can’t speak for every westerner of course. But it is funny how so many people when I told them I am going to Iran…they responded with “be safe”. As in… be really careful they don’t arrest you for whatever we find harmless in the West. Or don’t follow the rules of Islam. Or whatever. Women must cover their hair. You don’t see anyone wearing shorts. You get used to seeing Khomeini’s image. Other than that, I must admit, it is very normal. I NEVER felt not safe. Actually, Iran was the safest country I have visited! Even in seedy alleys (don’t ask) I felt super safe. The big cities could be almost anywhere. But a few things from the past are still visible 🙂 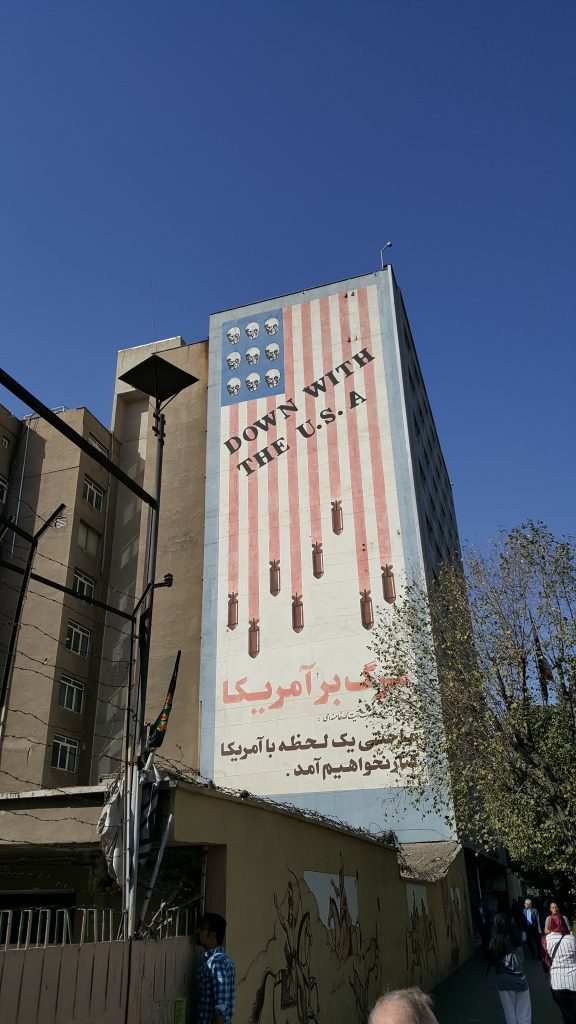 What was clearing immigration like (both coming and going)? I know that a large number of your potential group were denied visas. Any insights as to why? Suggestions to secure a visa (other than becoming Greek!)?

If you are a US, UK or Canadian citizen, you need to get your visa first and must be arranged via a tour agency and you need to have a guide while in Iran. You actually get a code from the Iranian Foreign Ministry and then you need to get your passport to the nearest consulate. Then you present your passport to the visa section dudes at the airport. It is a slow bureaucratic process as there are others (like everyone else) who get their visas on arrival. You add a couple of simple forms to fill out, different lines for buying health insurance and paying the fees (have crisp USD or Euros bills!) and you are looking at an hour or so for a couple of dozen foreign tourists after you land. Bunch of dudes stamping away justifying their paychecks. Again, not a big deal at all. You quickly learn that Iran is not that efficient in running things…

Clearing immigration both ways was a breeze. No issues. Smiles and “welcome to Iran” genuine wishes!

The visa problem with the Americans in my group was a one-time fluke. Not sure of the reason, something about a US politician not following the rules…or something. So unfortunate as we were supposed to be twelve but ended up with just four in our group. And I knew three of the missing eight. I am still super bummed about that. I wish I had used my US passport…so I can go with them next year.

Q. What was the security presence on the street? Militarized with lots of troops or just police presence or a mixture?

Very light! Perhaps another common Western misconception! You saw more police but they were primarily involved in traffic matters. Also, trucks and buses must stop at designated spots in main highways and the driver must park and go present some papers and sometimes give a usb stick that records speed to ensure there was no speeding involved. Those were annoying; I think we had to “report” about ten times or so during my trip. When we stopped at these, if there were policemen checking things, we would be fastening our seat belts. They never came into our bus to check us out. Instead, smiles and goodbye hand gestures.

There are guys with “Tourist Police” insignia but they are not true police, they are there to assist the tourists and they are always very pleasant to talk to.

Q. What was the mixture of terrorists — er, tourists — you encountered? Lots of Ruskies? Mainly Middle East?

Mostly from Europe. The most common tourists we came across were French and Germans. Then it was a whole bunch of many nationalities: Finland, Italy, China, Japan, Hong Kong, Malaysia, Indonesia, Spain, Netherlands. I don’t think I saw any Russians, which is surprising too!

No. But don’t take this the wrong way. I don’t like to go back to the same place as there are so many more places to see in the world! The only places I go back to are Greece and Malaysia because of family. And the only other place I made a promise to myself to return is Lake Louise in the Banff National Park, one day with my grandkids, God willing.

Q. Did you ever let anyone know you live in the U.S.? How do they feel about Americans? US Politicians?

In the first day or two, I answered “Greece” to the question “Where are you from?”. But after the initial reaction I got when I said I am an American…it was all USA from that point on! Iranians love Americans! Yeah, some would make the distinction “American government bad, American people good”. They are very nice and take hospitality very seriously and with lots of pride. And they really make it their point to show you are very welcome and they are really glad you are visiting their country. You know, deep down, we are all the same…

Q. Can you drink the water?

I drank the water in Tehran and Shiraz. It tasted fine. I prefer bottled water when I travel.

Q. Are the people happy, did you see people smile and laughing and enjoying life or were they miserable like Parisians?

Yes, happy and smiling and enjoying life. Again, very friendly folks all around. I walk around Athens and you feel depressed sometimes. Not here. In Tehran, you felt a little the pressures of a big city like massive traffic jams but it was all laid back and pleasant all around after you left Tehran. They like to just stop, pull out a carpet (of course) or sheets and have a picnic. One time a young family with a baby gave us their fruits as we were also having a picnic (long driving day).

Q. How was the food – any particular standouts and/or dishes you didn’t care for? Can you get it in A2?

The food was good in general. But not spectacular. Again, maybe it was because I had higher expectations. I love how they boil the lamb. And there was an amazing egg plant based dish that I must have again. I am a fan of cheap street food and I must say I really enjoyed the few falafel sandwiches I had, both under a dollar, one in a seedy alley lol! I don’t really care about the way they do the rice in Iran. I guess I am spoiled by the way my wife cooks rice hehe. The kebabs were good. But I had better. And not sure why they like fried chicken so much!

If anyone knows of any excellent Persian restaurants in South East Michigan or elsewhere in the US please let me know.

Q. Did you use public transit/taxi/car?

No, we had a small bus with us. And a driver. I took a taxi from the airport to the hotel in Tehran and feared for my life, crazy driver! We took taxis a few times. You negotiate the price up front,  no meters. I also took a taxi from my hotel to Shiraz airport. Some taxis are unmarked and they are very common. Did not take public transit…I wanted to ride the subway in Tehran but ran out of time.

Q. What would you see and do if you were to go back again?

Iran is huge, so much more to see. We just explored a small part of the country. They are now starting to get some tourists and they are gearing up for more. Like I said, I do not like to return to the same places. If I return, it would be to see places I did not get to see this time.

Q. What surprised you the most once you were there?

Iranian women don’t hold back on makeup, wow! Again, how safe it was and how friendly they are, especially towards Americans. And cost of living is still cheap. The other noticeable thing about their Islamic society is…you do not find bars and night clubs. Weird to go out late at night and not order a beer, some fine red wine or another drink. But many people drink….quietly at home. And smoke weed too, thank Afghanistan! No, you don’t find deranged Islamic morale police making snap judgments on the street if you are a good Muslim and whipping you if you are not. Never saw anything like that! Oh, local currency is about 35,000 equivalent to $1 USD. Pretty cool to walk around with a couple of million in your pocket. It felt…bigly lol.

Q. I do not have the exact question because I can not find it! It was asked by Deal Mommy and it was about how I see the political environment and whether there will be true change ahead.

Iran is so predominantly young. I think I heard a figure of 60% under the age of 24 or something like that. I could FEEL the yearning of the young wanting to get closer to the West and become part of it again. They also realize that change will not happen tomorrow. But they like the current government, they appear to be a lot more pragmatic than that &^%*$# Ahmadinejad who set them back many years with his antics and totally ineffective handling of the economy. There has been a lot of progress in the past four years. People are optimistic about the future. The country is opening up again. Very slowly but you are starting to sense it is about to bust open.

The most religious hardcore elements in the Iranian government are old. And they will die off as each year goes by. Not sure we are going to see a dramatic revolution again like in 1979 reversing everything. My bet is that progress will continue each year and with a bit more cooperation between the West and Iran we could win this country back again that we so unfortunately lost in 1979. I’ll take Iran before Saudi Arabia…any day!

Maybe I am too optimistic. The Iranian people love Americans. If the Americans ever visited they will realize how different things are on the ground here and how ridiculously wrong US media is about the place!

Suggestions to Iran: If you can erase the anti USA graffiti and stop chanting Marg bar Âmrikâ “Death To America” that would be great. I spoke to many so friendly and I wonder how many of them were chanting that Fridays at the mosque 🙂  One explained to me….We may say it but don’t really believe it. It’s an expression here, like “Happy 4th of July”. Funny dude!

I have lots of pictures, maybe one day I can do the trip report.