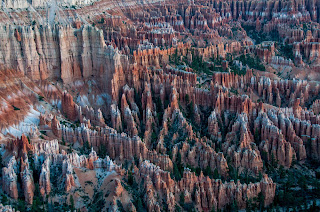 Hoodoos in Bryce National Park, Utah
Courtesy of Everything-Everywhere.com
Looks like I will be around New York/New Jersey until December 31st. I can’t get me any award flights anywhere desirable. And there is no way I am spending 305k Delta Skypesos to Sydney per ticket! I will attempt some more tries tomorrow…#developing. Yes I do know I should have started earlier but for reasons beyond my control I could only start looking in early December!

In case you have not heard, Delta is ending the partnership with e-miles so you only have until December 31 to cash out your miles (must be minimum 500). If not, you are likely to be forced into redemption with amazon.com or restaurant.com. Hey, amazon.com sounds good to me!

Very Good Points has been cranking out some killer content lately. Here comes another very useful post regarding the Comparison of Starwood’s Thailand hotels!

You can cry foul on Million Mile Secrets all you want. But you can not take away the fact that the dude writes incredibly well (maybe too well?) and his disclosure policies are one of the best in this space. He explains the whole US Air thing; I am certain he took his time to read our own amazing investigative piece on this very matter!

THE POINTS.BOMB PRIORITY CLUB TO AMTRAK TO WHATEVER DEAL

I think I followed this “deal” as it was happening but I certainly could be wrong. I will give you my take on it and if I am off please tell me! Apparently this was floating around Flyertalk for at least a few days (there appears to be some confusion over this; the bottom line it was NOT on a blog!). Then at 7.42 am Loyalty Lobby breaks it out in detail how you could exchange Priority Club points to Amtrak Guest Reward points VIA points.com in a very advantageous exchange! Now, this should have had bells going off ALL OVER your head. First, Points.bomb is in the same league as Cartera&Netspend. I avoid them like the plague and you should too, they pray on the same folks who redeem 70k Skymiles for a domestic round trip to Orlando and are so ecstatic about it! Apparently, you can then redeem out of your Amtrak Guest Rewards account to Hyatt, Hilton, SPG, Choice and of course for Amtrak travel. I ‘ve been having some connectivity issues here in New Jersey and was going to tweet that I personally would not do this as I just do not trust these companies to come through and this could lead to loads of hassle! Then at 7.43 am I see Gary Leff’s post about the same “deal” and I immediately thought ‘Oh boy, here we go again, some people would get hurt here!” Many people jumped on this. Then Ben could not help himself from informing his own readers about the same “deal” at 11.25 am with the screaming title starting with “Amazing value…”
This is not Alitalia guys who are on strike all the time or take time off for every occasion known to man!

Well, it was not long before Points.com fixed the exchange math error and made it, well, just like what you expect from this company…a horrendous exchange value that only the people mentioned above would do it (yes, they are out there!). Simultaneously, they canceled the exchanges too! It appears a few (the very first ones?) may have gone through (including Gary’s) but I bet there are a lot more tears than smiles. I would not be shocked if points.com somehow makes the speedy ones PAY dearly in some way too! If this is not a pure example of blogs killing deals I DO NOT KNOW WHAT IS!   It’s a tough call of course. Once it makes it on ONE blog it is destined for killing. The speed of pointsdotbomb about this was phenomenal. So…what about people who BOUGHT Priority Club points in order to do this? Ok, not the worst thing in the world but still…  Now as a blogger I even have more fixed feelings about this! IF I had decided to publish it, I would have MUCH MORE ALARMING language about the particular companies involved and their well deserved reputation AND that SPEED is paramount!  Enough said, bring on the insults, I am ready!
Or you could have kept it all quiet and let your twitter followers know about it in cryptic ways (no pics & arrows) but that would not help the blog in hits, bragging rights and all? And someone else would have outed this anway so might as well be first?? It’s a slippery new world we are in…


NOT SO BEST OF

Blogger hits new low…Serves aff link in a COMMENT, like serving them relentlessly in every other opportunity in almost every single blog post was not enough. Just could not let it go by without me commenting on it, Delta Points, this is what I do here!! It is comment #10, wow!

Milevalue has a piece titled “Roundtrip to Sao Paulo or Rio for 30k Miles”. Ok, fine. But I want to point out the extremely shameful plug at the end for the US Air “50k” offer, something that we, along with others, have written about and consistenly proved how this affiliate offer is total crap! If this is not a low blow to the intelligence of the readers I do not know what is! If not, it is incredibly misinformed. And yet another piece of proof that when bloggers get on the affiliate credit card merry go round the behavior…changes and it is NOT to the better!! We call it as we see it here at TBB!

Ok, this belongs in the best of category probably. But the title is “World’s Worst Places:Top 10 Places in the World You Do Not Want To Visit in 2013” Ok, these are bad, no need to mileage run there, don’t be a fool!

Reason number 934 to not like Delta? How about when even Johnny Jet wonders why “Delta has the Worst Frequent Flyer Program”. For the record, I made a comment in the story giving my perspective of a long time Delta Elite (Gold or Platinum) and why I am giving up, did NOT have any swear words and…it appears…I was moderated to oblivion! You take the time to contribute to the discussion and you are zapped…It goes against everything the internet stands for imho. I won’t comment again EVER in that blog. If my comment somehow appears again…I take this back:-)

10 Lessons from 10 Quotes that Changed My Life
Number 2 definitely applies to me as I did not want to regret not starting a blog!