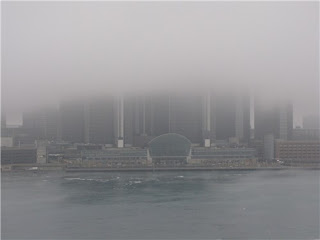 My travel back from FTU was quite an adventure! I redeemed 12,500 United miles for the red eye LAX to IAD and then was going to catch a short flight to DTW. After waiting on the plane for almost an hour, we returned to the gate. Cause=Fog in Detroit. The darn fog was expected to not clear until the afternoon. Flight kept being pushed back until eventually was cancelled. The nice staff at the United lounge could not get me out and to Detroit through another city! So, they rebooked me for the 5 pm flight. So, I spent the whole day at the United lounge working away but desperately needing more sleep! Off to the gate we go. We get on the plane and we see the pilot driving back towards the gate telling us that there is now a ground stop in Detroit! Five minutes after he said that, he came up again and said “Things quickly change, we have been cleared for takeoff”. Hooray, especially from several passengers who came in the night before from California! So, instead of lading at 9.45 am we landed at 6.37 pm. We expect this in the winter in Detroit from snowstorms. But fog was definitely something totally unexpected!

There is a lot of material I wanted to point out to my readers, some of it has been neglected during the hectic days at Frequent Traveler Univestity FTU in Los Angeles. Remember our motto: “We waste our own time reviewing blogs so you don’t have to”.

Kanadian Kilometers is a new blog that started during the epic exchanges in FlyerTalk’s “Deal Killing Blogs” thread. His post “Look for the best bonus” was interesting. He makes some very valid points. I find the issue of disclosure paramount and he does not. Ok, we can agree to disagree. One day I will elaborate…

In a post about the Club Carlson Visa at Loyalty Traveler, we had the honor of being referred to as “the provocative new blog“. In a perverse way, we like it:-)  Ric ends the blog post with “Perhaps I will start pimping credit cards like other travel bloggers to really play this loyalty game to the extreme.” This generated some interesting responses. Some readers openly pleaded with Ric to add credit card links because he “should be rewarded for his hard work”. Others encouraged him to start pimping them. From my point of view (distorted by strong drugs prescribed by my therapist over the years), I just wished there was a way to show appreciation for bloggers in a meaningful monetary way without getting into bed with these affiliate/amwaylike/nontransparent/pimporwetakeyourlinksaway companies…  And please do not get me started about them banks, this is to remain a PG operation, lol.  Notice I said “meaningful” monetary way. Interesting how a reader with the handle dracs commented “At the end you can always exit out of affiliate game if you feel your thinking is getting influenced.” Ok, but excuse moi por favor (showing off our advanced knowledge of foreign language skills), I think from the moment you signed on the dotted line your thinking HAS already been influenced! Denying it is delusional, always imho.

Travel Summary writes about “Million Mile Secrets and a Curious Case of Ethics” Interesting blog post. This discussion of where the line is and the debates about it have been going on for years in this community. Sometimes I have felt ashamed about being associated with it! I have learned to just ignore the “tips” that I am not comfortable with. My threshold tends to be quite low I must admit. I lose some “scores” along the way and that is perfectly fine. Will I ever feel comfortable with this “tip”? Hell no, I just can’t do it! Then again, I haven’t had to actually try it for several years:-)

The Deal Mommy takes Johnny Jet (yes, not Chris Elliott,what a shock!), to task for recommending readers to redeem American Express Membership Reward Points for…, gasp…., merchandise! That was a great rant Deal Mommy, we loved it here at the RWH (Rant World Headquarters…just made this up, lol)! I agree with Deal Mommy of course. Redeeming for stuff is a GIANT rip off. The key to this whole post is “sponsored post”. I appreciate the disclosure. BUT once you see it, it means it should not be taken that seriously. And this is why some bloggers do not bother with any disclosure other than a blanket cya disclosure buried somewhere in the website readers will never bother reading, if at all! It is…disturbing; then again, we are very easily disturbed due to our mental health issues we are dealing with since birth!

In case you missed it at the Sunday New York Times: “Test Flying the 787 Dreamliner“

Field of Burch has an interesting post about unusual town names We love to laugh here at TBB! Some of the the names AND commentary is hilarious!

Loyalty Lobby has a very comprehensive hotel promo roundup for December. Like the PC codes too!

Frequent Miler finally writes about the Big Crubs and AMEXGiftCards Actually, I noticed that elsewhere nd was wondering what was taking FM so long to write about it. You slipping buddy? Maybe you need a sharper uniform to conduct those experiments? Since we started writing this blog we have no time to conduct our own experiments! And we are doing all that for our readers so remember that when we get our own credit card links, lol! Ok, we got diverted again. What I noticed is how FM lists his Big Crumbs referral link AND right below it lists the referral links for two other people! When was the last time you saw THAT from another blogger?

Tweet by @TheDealMommy: “pushing merch redemption is the spirit airlines card of sponsored links” [yes, yes, we so agree!]

Tweet by @AllanAtlanta: “The points addiction is like a drug. You could end up dead in a ditch.” [LOL]

Flight attendant talks about the Highs and Lows of the Job at Gadling. We were especially interested in the Mile High Club details!!!

The Sexiest Hotel Bed in the World  Wow, that is impressive. I wonder if they will ever have a 35% off sale again like that hotel chain usually has…its name is escaping me now, starting with W or something:-)

Thoughts you must leave in the past  I had to leave the “I don’t have time to be a blogger” excuse behind…even though it is true:-)