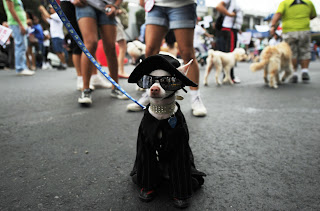 Today it is December 9th and it marks my one month anniversary being a blogger! If you had told me that I will still be doing this AND sticking to daily posting I would have said you are a lunatic! It is true and I am proud of the fact that I am still here standing. Will I be here on January 9th? I think so but no promises on the daily posting…it sure is exhausting!!

Very slow say yesterday indeed. We will pass on highlighting worthy blog posts as we only found one. And this is the BEST blog post by my hero at PointsEnvy. Brilliantly funny, how can we ever top this!

The New One Card to Rule Them All

On to my notes from FTU

As stated previously, the best reason to go to these miles/points gatherings is the social aspect and the networking that takes place. It is one thing to know someone on twitter and another to actually look into his/her eyes and look into their soul. Isn’t that GW Bush who said that about Putin? And weapons of mass destruction? And….ok, I am veering away again.

Focus George focus focus! Ok, back on track. My notes will, naturally, vary wildly! This blog has helped me immensely to get things out of my system and just “let it go George, let it go” per my therapist’s instructions.
What was the ONE thing I heard at FTU that made me shake my head repeatedly? It was “What is the difference between stays and nights?” Yes, seriously. Perhaps the organizers and participants could come up with a short document to be read by all newbies, you know, something as a prerequisite explaining some basic concepts such as the question above, definitions of basic terms such as mileage run, elite levels by airline, churning, and fuel dumps. Just kidding on the fuel dumps;-)
By far the most professional decked out booth with bow ties, leopard dresses and promo materials (notepads, pens, knick knacks, etc) was by Million Mile Secrets. I felt like I was in the Consumer Electronics CES Show or another industry conference. Wow, how far this little quirky hobby has come! The whole show sure explains Daraius’s marketing background. Let me assure everyone that Daraius was the only one with a bow tie! I guess it is his trademark. Definitely not our cup of tea as we generally do not like bow ties, tuxedos and things of that sort, just not OUR style! MMS also gave out two $5 Starbucks gift cards. We gave one to housekeeping stuff along with the tip we always leave every morning and the other one we lost!
The Hyatt session was a big commercial. Very nice guy, one of us crazies but absolutely nothing new. I understand sponsors get face time.
The variety in the participants’ knowledge levels is HUGE. There was an attempt to have an advanced and beginner track but lines were kind of blurred. I always enjoy watching newbies ask questions and, in general, see their reactions throughout the conference. At times, I see their mouths open and they look like a giant jolt just hit them, they get THAT look that tells me “Oh boy, they do not realize what they just got infected with!”
The most entertaining speaker was beaubo. Yeah, the guy who hired Thais to fly to collect frequent flyer miles and got busted by the DEA for suspected drug trafficking. Try to explain that mileage scheme to DEA, lol.  He also, again in my opinion which is always baseless, has the best feel of where this industry is going! And I so agree with him that we should become free agents and not bother with achieving lower level elite status anymore. This is no longer a loyalty game, it is pure and simple a money game. The days of the airlines being mismanaged and allowing loopholes so wide a whale could go through them are OVER! Average capacity is 90% now. Fees and more fees galore. United will be selling upgrades left and right straight from the CEO’s mouth. Tiny regional jets are everywhere. Miles are to be devalued again and again. Mounting frustration to find award seats (Delta anyone?) “What a sickening vicious circle we are in!” . The earning schemes (credit card signups, Bluebirds & Vanillas) is just not sustainable!  Yep. I agree Sir!  At the same time, there is no way in hell I could even think about some of the stuff this guy does, let alone do!
Regarding the secret session…I was in there and listening to the speakers giving out “secrets” and giving out codes and newbies writing them down and being told “please do not let this out of this room”….all I could think of was ‘You got to be kidding me”! Anyway, I give it a few months before the code numbers change! Remember what happened to that “secret” code “confidentially” given out in Chicago Seminar #1, you know, the one for StarwoodGold? It was interesting as my stay was with one of the corporate codes given away! And yes I do feel bad about it!
In the credit card session, in response to a question, MMS admitted that banks continue offering us these mega signing bonuses only because they make money from late fees and interest charges! Like there was never any doubt!!! Oh yes responsibility and all that. Instead of slides saying “Thank you Chase” and “Thank you Banks”, how about a slide “If you ever carry a balance we will come & kill you” or something like that? Ok, come down George, breathe, breathe BREATHE…don’t go on…need to finish this darn post!
A funny moment occurred when an audience member asked “How can we get our own affiliate links” in one of the credit card presentations!
There was a water main break in front of our Sheraton hotel and we were with out running water a fulll day! Very inconvenient to say the least. I think the hotel folks did a remarkable job managing this and we even had the General Manager come up on stage and apologize and all guests received 4k Starwood Preferred Guest SPG points. Non guests were to receive 2.5k SPG points. Well done SPG!
I stayed next door at the Radisson for two nights (free night promo) where the Miss California pageant was held. It was a very beautiful hotel:-)
Heard around FTU:
“Best part of being married is you get to double the credit card churning!”
“I hate those fees”
“I can not hold it anymore!”