Well, you know what they say…”Imitation is the best form of flattery”. So another blogger, What’s Your Point at First2Board, makes fun of my blog and I LOVED it! It made me laugh so hard I think you should laugh too! So, I got permission and here it is, enjoy:

And thanks to all my readers, enjoy!

Here it is the direct link to it. Even the title is so TBBish:-) 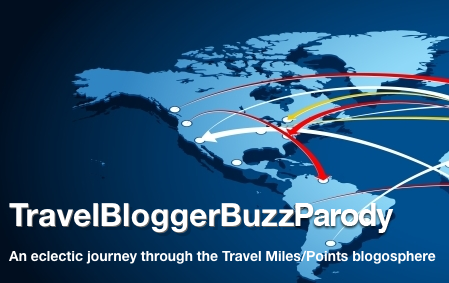 First2Board announced the details of their Charleston sessions. I’m thinking about going just so I can confront Mr Pickles in person and ask him what happened to his “secrets” series that he promised to reveal to us. Ugh. I was hoping he would divulge stuff about eyebrow hair.

How to use FlyerTalk app. Yeah, ok. The first two hits in the first screen shot are from someone named Canarsie. Who the frig is this Canarsie anyway, and why would the writer of the article have Who Will Be The Next FlyerTalk Member To Post? as the top choice? I can think of millions of other threads I’d rather read on FlyerTalk.

Points Summary posts a series about the sights and sounds of Rio de Janiero. The latest in this series is Centro, and the photo above is from Sugarloaf Mountain. Now I’m in the mood for some Brazil nuts. Sounds right. I read about Brazil and I’m nuts.

An absolutely gorgeous bridge which may be the most expensive toll bridge in North America depending on what you drive. Think I’d rather swim.

This brings the phrase “I would kill to have dinner” to a whole new level. WTF?

Get 40 My Coke Rewards points just for signing up as a member of the Red Robin Royalty program. Nothing like free points and free food…and no affiliate links!

Speaking of affiliate links, what’s with What’s Your Point? A record 513 affiliate links were embedded in one entry containing only a total of 15 words. How’d he do that?

Get ready for yet another blog. First post by Wald Around The World is about…you guessed it…going around the world for 6 months, and he bought his ticket on Groupon. Matt Wald quit his law firm job to do it. I would do the same thing if I didn’t have this blog taking up all of my time. Maybe I can think of a way to get affiliate links to pay for my trip and blog about it at the same time.

View From The Wing posts about two favorite readers for when Google Reader goes bye-bye on July 1: Bazqux and Newsblur — but they cost money. WTF, Gary Leff? I ain’t got no dime for dat!!!

Heck froze over today. My love affair with Delta Points continues…he actually apologized today for a mistake he made! His “mistake” was that he didn’t post Delta Points on Facebook sooner. Now you can keep scrolling FOREVER and “like” everything along the way. Just what I want to do about the blog about my beloved airline…NOT.

The Gate posts some stuff about the FDA inspecting the airplane you are on. Rodent excreta pellets and mammalian urine, anyone? I wanted to see pictures of that, but Brian Cohen did not include any of them, and I’m hungry now! I am trying not to be one of them angries again, but I can’t stand when bloggers blatantly promote themselves and post links to their blogs anywhere and anytime they dang well feel like it.

So much of the same crap in the blogosphere…I am tired. And it’s getting late and have all day of meetings tomorrow. Who the freak has meetings on Sunday? Cut me some slacks s’il vous plait. I’ll even take pants instead of slacks. Get me a tie so I can wrap it around my neck. Sock it to me ’cause I’m full of shirt!!!

This blog is taking too much of my time. I haven’t slept in five months, and I have way too much reading to catch up on. Maybe I can think of a way to sleep while I blog. I’ll ask WordPress if there’s a plug-in for that as I eat my dinner while I take my shower on Thursday.

I can’t believe this blog is still here. No one reads it. No, wait, I take that back. Wife is thrilled that she is no longer the only person reading this thing. Readership tripled when I finally convinced my son and daughter to read it. Must’ve been that threat of a one-way trip to Yorkton, Saskatchewan in January that convinced them. Did I spell Saskatchewan correctly? WTF is a Saskatchewan?!? Sounds like some hairy monster. Anyway, maybe now I can convince some credit card companies to let me post affiliate links.

It’s been 30 years since I was 16 years old. I miss those days. No writing this blog which takes at least 29 hours out of my day and 70 years off of my life.

Darn Miami Heat with the way they are playing in the NBA Finals series. Screw it. I’d rather watch my dream game one day: 49ers vs. 76ers in the Stanley Cup finals. I predict that the 76ers would beat the 49ers. Final score in last game: 76-49, of course!

North Korea vows to build up nucular deterrent. My imitation of GWB. Nucular. Get it? Good, huh?

North Korea declares that they are a sovereign country. Oh wait…that was back in 1948. Never mind.

House for sale in Atlanta for the bargain basement price of $14,900. Think North Korea can afford to buy it?

Himalayan salt caves. Supposed to heal you. Salt comes from place too close to North Korea for me.

22 Places hard to believe they exist. Yeah, I know I ran this before. But I never get bored with Bored Panda. Sorry this was not about North Korea. I know it has been 47 seconds since I last posted about North Korea.

Want some free flatbread from Chili’s? Claim it now before they’re (burp) all gone!

My point on this parody of TravelBloggerBuzz — which is one of the few weblogs I read on a regular basis, by the way — is that I think I know why George spends so much time writing that weblog: because a significant portion of it is not about the travel, miles and points blogosphere.

Bored Panda and Twisted Sifter do contain good content — but I believe that George should pare down TravelBloggerBuzz to report only on the buzz with weblogs and keep us on our toes. That should significantly cut down on the time he needs to write TravelBloggerBuzz daily.

What’s that? You like all that extra stuff? I have a solution: launch another weblog, George! Include the amazing photographs, odds and ends, videos and other such content in that other weblog. C’mon, George — you can do it!

I know what you are thinking, George: what idiot would actually write two weblogs on a regular basis?