We bring you the TBB Best of Web links: expose the higher education scam, watch in horror all the arms sales through history, argue for support of the capitalism pie, get into details of the Malaysian mega fraud and obscene levels of greed and corruption, a great site with death resources and a hilarious obituary! You all enjoy the weekend and see you Monday…maybe.

This article will educate you and it will stun you.

Just a few years ago, universities had a chance to make a quality education affordable for everyone. Here’s the little known and absolutely infuriating history of what they did instead.

online learning…This is because many colleges don’t actually run online programs themselves. They outsource much of the work to an obscure species of for-profit company that has figured out how to gouge students in new and creative ways. These companies are called online program managers, or OPMs, an acronym that could come right out of “Office Space.” They have goofy, forgettable names like 2U, HotChalk and iDesign. As the founder of 2U puts it, “The more invisible we are, the better.”…The schools often omit any mention of these companies on their course pages, but OPMs typically take a 60 percent cut of tuition, sometimes more. [60%!  I can see it now, The Points Guy Inc teaching debt management courses online soon LOL!]

We go through a fascinating history of how it all started. From Princeton Review to Kaplan to the legislative/lobbying efforts to the current clusterphuck about to happen again with the current administration’s disdain for “regulations”. And then you wonder why scandals bribing to get kids into prestigious colleges happen…YIKES!

I had to take a bath after I was done reading this.

Don’t get angry. Get even by clicking on my links instead! 🙂

Maybe it is the angry TBB Best of Web edition today…

Press Play and watch this and cry…

I really enjoy reading the memos from Howard Marks. Because I really like his style of writing a lot! Always so thoughtful, engaging and keeping things simple and easy to understand for everyone. No technical terms to confuse readers for the most part. And always educational of course.

Some people here have accused me of being a socialist which is ridiculous. But first, don’t get too distracted about labels. The ones screaming Socialist to Bernie Sanders also scream to get Washington to keep their hands off Social Security and Medicare. LOL!

For the record, I am in full agreement with Howard here!

Capitalism doesn’t know about or care about fairness in the sense of equal sharing.  What it considers fair is the proposition that people who have greater ability or work harder should be able to earn more.  That potential, it says, provides incentives for hard work and rewards those who achieve, ultimately resulting in a better life for almost everyone.  The story of China – just like that of America – shows that it works.

She entirely misses the point.  There was no $3 billion sitting in a city bank account, waiting to be spent on either subsidies for Amazon or enhanced services for New Yorkers.  The $3 billion going to Amazon wouldn’t have represented a diversion of resources from other potential uses.  It consisted entirely of contingent future payments: the part that would be kicked back to Amazon from the taxes it would pay, the balance of which could be used to support infrastructure or services.  No Amazon, no $3 billion paid out (and no $24 billion of net taxes received by the city and state).  Ocasio-Cortez either (a) completely misunderstood the deal she was criticizing or (b) overlooked the facts in favor of rhetoric calculated to play on resentment and scare up votes.  Which explanation would you consider preferable?

The rhetoric of the far left plays on resentments and differences, and it’s easily swallowed.  But the policies are more likely to equalize the sharing of misery than to expand blessings, however unequal.

About 50 years ago, an older friend described for me what he felt made America great:

Today, too few Americans feel they might own that Cadillac.  Taken to the logical extreme, that has the potential to bring the American miracle to an end.  Thus, business should do all it can to arrest the trend toward stagnant and unequal incomes . . . not just to be fair or generous, but to assure perpetuation of the system that got us here.

Capitalism is the most dependable route to prosperity.  And it has to be responsible capitalism.  The solution can’t lie in turning away the Amazons of the world, imposing extra taxes on Cadillacs or otherwise shrinking the pie.

I could not resist… 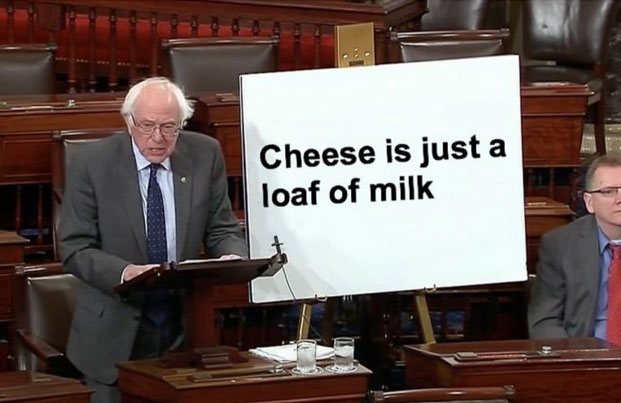 The movie was great by the way! And I can’t wait for the new movie to be made. It will be really weird though…

Again, in a cosmic irony, DiCaprio desperately wanted to make a movie that deeply examined the sort of greed that rots the soul and ruins our natural world, yet this highly intelligent, sensitive actor never recognized this same greed when he partnered with it in reality. He somehow missed it when Low gave him a Basquiat painting worth $9.2 million and a Picasso worth $3.2 million. He also missed it when, in that same summer of 2013, two producers of the original Dumb and Dumber were excluded from the sequel and countersued Red Granite, the production company that was making both that movie and The Wolf of Wall Street. The veteran producers alleged in their lawsuit, later amended, that they’d been informed of a vast criminal conspiracy underwriting the company:

The greed and corruption levels involved here are unbelievable! Wait, let me do this better: “It will shock you! With video!”.

Resources for dealing with death

I added the Modern Loss website to my Feedly RSS feeds account. What great content for all things dealing with this part of life. See what I just did? 🙂

I suggest you bookmark and refer to it when you need it. As we all get older we run into this more often, sad!

I usually like to stop at five links but someway somehow I insert a bonus sixth one.

To stick with the angry/sad theme of today, why not share with you an obituary next!

WTF TBB, seriously? An obituary next? Wasn’t it enough to get us all angry and depressed with all the links above?

Come down angry reader! I am sharing this one to make you laugh! It’s one of the most hilarious obituaries you will read!

Just a few excerpts, read the whole thing and LOL!

Tim Schrandt (Lynyrd) made his last inappropriate comment on March 29, 2019. If you are wondering if you may have ever met him, you didn’t – because you WOULD remember. For those of you that did meet him, we apologize, as we’re sure he probably offended you.

Tim led a good life and had a peaceful death – but the transition was a bitch. [If this is not considered an EPIC line, I don’t know what else will qualify!]