Here is another post with the best material I have found about the biggest geopolitical event in Europe that is reshaping everything in shocking speed, buckle up! Do NOT click on clickbait stupid shit, savor your attention on things that matter! We go heavy on Education today about the Ukraine Russia War, the stunning speed and effectiveness of the sanctions, madman Putin and hero Zelensky and lots more. Stand With Ukraine!

This was a late addition to the blog post as it is the most current (written on March 2). And I think the author nails it!

We are in day #8 of this war and we all have pretty much realized how senseless it is. Because…

As the Russo-Ukrainian War takes a darker turn it is important to emphasise this essential point. This is a war that Vladimir Putin cannot win, however long it lasts and however cruel his methods. From the start the Russian campaign has been hampered by political objectives that cannot be translated into meaningful military objectives….This underlying strategic folly has been reinforced by the tactical ineptitude with which the campaign has been prosecuted.

I am being hopeful that there will soon be a negotiated cease fire and eventual end to this madness. I think the Russian side has realized its mistake and is feverishly trying to find a face saving deal before they get lynched…which is likely still going to happen eventually. Regime change is coming folks…in Moscow before Kyiv. Of course, I am no expert in this area and, you know, wars are unpredictable and…I need to say this to just make me feel better because we all need to hear it: We Are All Ukrainians!

Lastly, though this has yet to be of value, the Russians accepted the possibility of a negotiated cease-fire, as opposed to an imposed peace, by agreeing to talks at the border with Belarus. It is worth noting that Putin prior to the war showed no interest in direct talks with the Ukrainian government, not least because this would confer upon them some legitimacy. Putin’s spokesman has acknowledged Zelensky as the true leader of Ukraine.

If there was ever any possibility that this war would end with the complete subjugation of Ukraine by force of arms this has now gone. Nor will it end with Russian forces being chased out of the country. Most likely there will be a negotiated conclusion, probably at the cease-fire talks. Although it is possible to conjure up some document in which the Ukrainians promise not to do things that they would not have done anyway (like develop a nuclear arsenal or be Nazis), and might even make some major concessions, such as accept the loss of Crimea, they must emerge from this ordeal as a free and independent country with no Russian troops on their soil.

The Roots of the Ukraine War: How the Crisis Developed

Excellent background, learn from history. But make new one. Ok, that did not come out right as Putin sure expected to insert himself in the history books with a triumph. Instead…lol.

Understanding the War in Ukraine

First, let’s get educated about it from a military historian. Please note the places to donate listed in the fourth paragraph.

And just this so you keep it in mind while consuming news about the war:

Here I want to caution you: a lot of the information you will see over the next few days is coming through the fog of war. Some of it will be intentional disinformation. No one in the media or on social media really has any kind of precise view of what is going on. Even the intelligence agencies – for Russia, Ukraine but also NATO countries – are likely struggling to get a firm grasp on what is happening where.

Moreover, war is not the realm of certainties, but, as Clausewitz says (drink!) subject to “the play of probabilities and chance” (which is to say, ‘friction’). War is unpredictable by its very nature. No one knows what is going to happen, but we can venture some very general suggestions of the most likely course of events.

‘Yes, He Would’: Fiona Hill on Putin and Nukes

This is a must read interview by Fiona Hill. Remember her? She is the Russia expert who testified in the Trump impeachment hearings. Read the whole thing, it is fantastic. And chilling.

The Terrible Truth So Many Experts Missed About Russia

I think they are right. Like Macron said, the dude looks different in the past few years…

The political science literature suggests that personalist dictatorships are more erratic and dangerous to the outside world than other sorts of autocracies.

Researchers have found they are more likely to start wars, for instance (institutionalized civilian-run regimes are about as apt to use force as democracies), and also tend to perform worse militarily (not surprising, since their leaders are often surrounded by yes men). But while civilian-run regimes might be less apt to launch destructive, harebrained conflicts in the short term, in the long term they can still be ticking time bombs.

That’s because as they age, their intricate power structures often devolve and allow dictators to consolidate personal control. In a forthcoming paper, Andrew Leber and Matthew Reichert of Harvard University and Christopher Carothers of the University of Pennsylvania theorize that this tends to happen when there’s no influential old guard of political elites who can stop them. All of which pretty much sums up what has happened in Russia over the last two decades.

It is amazing what this guy has done in a week, wow!

Vladimir Putin has attempted to crush Ukraine’s independence and “Westernness” while also demonstrating NATO’s fecklessness and free countries’ unwillingness to shoulder economic burdens in defense of our values. He has achieved the opposite of each. Endeavoring to destroy the liberal international order, he has been the architect of its revitalization.

We have no right to bitch about anything ok?

Those of us already living in free societies owe Ukrainians a great debt of gratitude. Their courage has reminded us of the nobility of sacrifice for just causes.

How Vladimir Putin Miscalculated the Economic Cost of Invading Ukraine

To me in the financial services world, I must admit, I can not believe my eyes. What is happening is UNREAL!

If Putin was indeed calculating along these lines, he was gravely mistaken. On Saturday, Ursula von der Leyen, the president of the European Commission, announced that the E.U.—in coöperation with the United States, the United Kingdom, and Canada—was taking steps to “cripple Putin’s ability to finance his war machine.” The transatlantic allies moved to bar “selected Russian banks” from the global SWIFT messaging system, which financial institutions use to facilitate cross-border transfers of money. And, in a more surprising step, they also announced that they would impose “restrictive measures” on the Central Bank of Russia, with the explicit aim of preventing it from using its large stock of foreign-exchange reserves to lessen the impact of the sanctions. “This will show that Russia’s supposed sanctions-proofing of its economy is a myth,” a senior official in the Biden Administration said, in a teleconference with reporters. “The six-hundred-billion-plus war chest of Russia’s foreign reserves is only powerful if Putin can use it.” The measures the allies announced were designed to block Moscow’s Central Bank from buying rubles from Western financial institutions, a step that could offset the impact of sanctions and stabilize the Russian currency. “The ruble will fall even further, inflation will spike, and the Central Bank will be left defenseless,” the U.S. official predicted.

First, I must admit getting an agreement on SWIFT was possible but unlikely. And Putin was certainly betting on that too. But the Central Bank action is such that I really think it is so strong that it will force a face saving deal. The sooner, the better of course for humanity. And the poor Russian citizens who certainly do not support this war. In the meantime, Russia is going full speed into a Great Depression and the sooner someone inside the Kremlin knocks off Putin or the people finally rise up to get rid of him the better for humanity. They must realize after this war that this is certainly not the guy to make Russia strong as their standard of living collapses shockingly fast!

Details of how the G-7 countries decided to target Russia’s Central Bank have yet to be revealed. [I would love to find out one day! I remember Biden being asked a question in a press conference in a mocking way about how the coming sanctions will be proved ineffective and he responded with “ask me in a month”. He was wrong! Ask me in a week was the right answer.]

Russia’s Economic Meltdown, Putin’s Big Mistake, and the West’s Financial War Against Vlad and the Oligarchs

Fantastic podcast by Derek Thompson dealing with the economics of this war. We are in unprecedented territory here and expect more inflation and supply chain interruptions to be prolonged. Hopefully not for long. So, next time you pay a little more for gas, you know, stop bitching and see what the Ukrainian people are enduring ok?

Live Monitoring of All Sanctions Against Russia

And a few more miscellaneous links:

Over on Twitter, @zoyashef is great, here is a must read thread from her.

– Economic prosperity, or at least stability, to compare with the chaotic 1990s
– Have a ukraine friendly or at least neutral to Moscow
– Create divides in the West to undermine any sanctions or other hostile policies

All up in smoke in six days.

This is the first few minutes of Zelenskyy’s inauguration speech in 2019. It is amazing!

And I leave you with these two pics and you tell me who is the strongest leader. 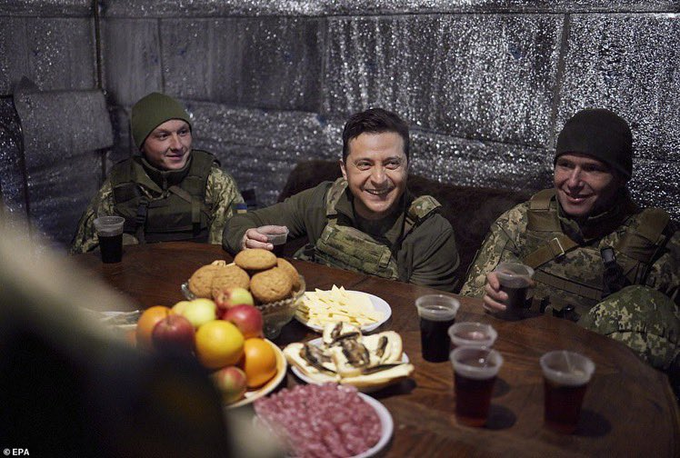 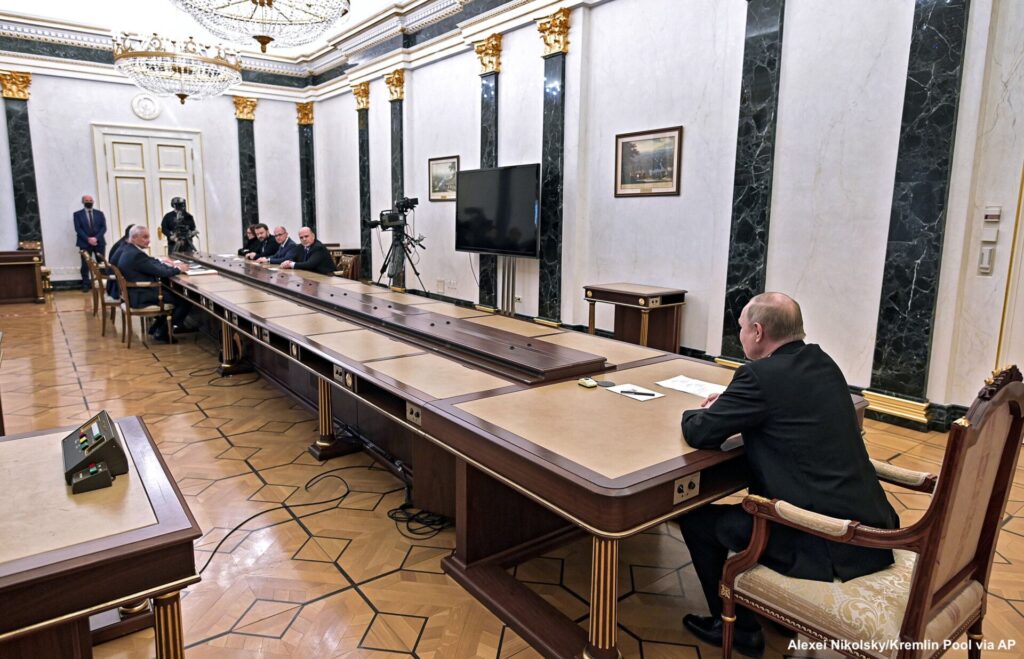